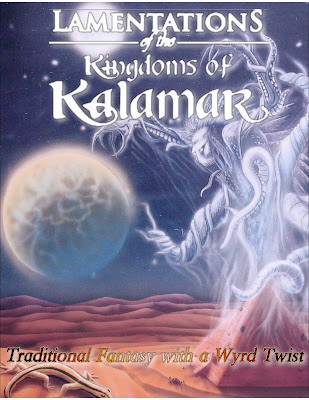 I think it started when I read an old blog post from Dreams in the Lich House where John was combining Oerth with darker influences, leaning into a Gothic Greyhawk setting.

There is an inherent lingering darkness in most traditional fantasy, which I think is wonderfully pointed out by games like Torchbearer and Lamentations of the Flame Princess: If there are monsters living in a hole in the ground, a veritable crypt of arcane wardings and eldritch foulness, then only a mad person would make a career of robbing such places.

I've been a fan of Kenzer and Company's Kingdoms of Kalamar world setting for years, running it with Hackmaster 4e for almost a decade. When I set HM4e aside to explore different shores of the Old School Renaissance, I didn't really expect to come back to it so soon.

I had exhumed my box set of Ravenloft and Jack Shear's delightful & blog sprawling World Between, got myself lost in the expanses of Dolmenwood from Necrotic Gnome. I delved into Dungeon Crawl Classic's long forgotten Known Realms box set and dug into pretty much any other OSR related campaign setting that caught my eye. For the last two years, with short breaks, my reading material has been largely campaign settings as I tried to put some sort of focus into doing my own work.

I'm still pursuing that campaign setting, but I want to put something on the table more immediately - so I'm adapting bits and baubles from my collection of RPG curiosities to a setting that I have some familiarity with, to create an online campaign that fills a void in my blackened grognardian heart.

Over the next couple of weeks I'll be dissecting the Coin Trilogy - a series of low level adventures that, to me, is an unpolished gem in need of some dusting down. The railroad nature of the series is perhaps its greatest flaw - but there is a great deal of room to explore in an expanded hex crawl reworking. The plotline will still be in there, somewhere. I'm also sure that I'll work in a few other adventure hooks from a variety of places, as I can never seem to leave that Frankenstein habit alone.

The next few posts will be ruminating on what it's gonna take to make vanilla taste like bittersweet chocolate. Until the next crime...